Europe is indeed going through a phase! A phase of malaise (could not resist it)! $17 trillion negative interest rates centred mostly in Europe tell a horrible story. This will drive capital out of all European countries, to the US and to a lesser degree Canada.

Money is voting: One example is Decca Immobilien from Germany that just invested half a million in an Edmonton tower. Yep! Edmonton! Another example is that foreign fixed investment into Canada in August clocked in at $4.99 billion. Finally, Canada’s population is growing, while other G-7 countries experience population shrinking.
Capital is looking for return. There isn’t any and investors are playing the “yield hunger games”. The outcome is continued capital flight and people taking on too much risk, buying the wrong companies and the wrong real estate with poorer and poorer debt portfolios and poor areas.

What should you do? Pay off all loans and go long term. These lifetime low rates can get you to safety. You may even want to borrow the money at these incredible low rates and consider the interest payment like an insurance policy.

Michael Campbell and Michael Armstrong predict that there will be a credit crisis in 2020/2022. Be strong, get hard (cashflow) assets but get and stay safe as well. 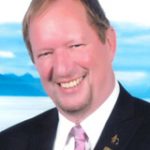